So the Sky Sports Deadline Day Wank-A-Thon is finally over for another few months and it’s time for us to all get back to normality. Whatever that constitutes in football…

This time last year, Deadline Day down at Meadow Lane had a completely different feel to it for various reasons. After managing to lift a transfer embargo and staring down the barrel of League Two, Kevin Nolan charged into the transfer market and came up with five signings. Mark Yeates, Marc Bola, Tavhon Campbell, Josh Clackstone and Nottingham Forest’s Jorge Grant all put pen to paper on six months deals and gave the squad a much needed injection of both bodies and quality. To the delight of all associated with the club the ship steadied and Notts finished the season in tremendous form.

This January, the landscape is very different. Sitting an unprecedented third in League Two and awaiting a FA Cup fourth round replay against Premier League Swansea we are most certainly a club on the up. This January the window and in turn deadline day has been viewed as a chance to strengthen, push on and achieve what this time last year seemed a million miles away.

The window kicked off for Notts fans as far back as October 12th as it was announced we were to re-sign ‘red card machine’ Liam Noble from Forest Green Rovers, more on that later…

As January 1st came around it was clear to many that the squad needed strengthening with the main priority for most being another forward. Despite Notts continuing to score goals, a clinical finisher would clearly improve any squad, let alone ours. The second area of the team that needed looking at was at centre half. With Haydn Hollis out of the picture, as the window opened, only Shaun Brisley and Richard Duffy were our recognised centre halves. Elliot Hewitt had deputised in absence, but that knock on the the stability of central midfield also had its implications.

After rumours had circulated days earlier, it was eventually announced that Ryan Yates had been recalled by Forest, given a new contract and sent to League One Scunthorpe for the rest of the season. Bollocks. The role Yates played in the first half of the season cannot be underestimated. Whilst Grant banged in the goals, Yates was the man. The heartbeat of the team.

All of a sudden, we needed to look at the whole spine of the team. Not only due to those who had departed, but also due to those who were out of the picture all together. Again, more on this later. As fans took to various outlets to voice their opinions, Mr Hardy tried to reassure. 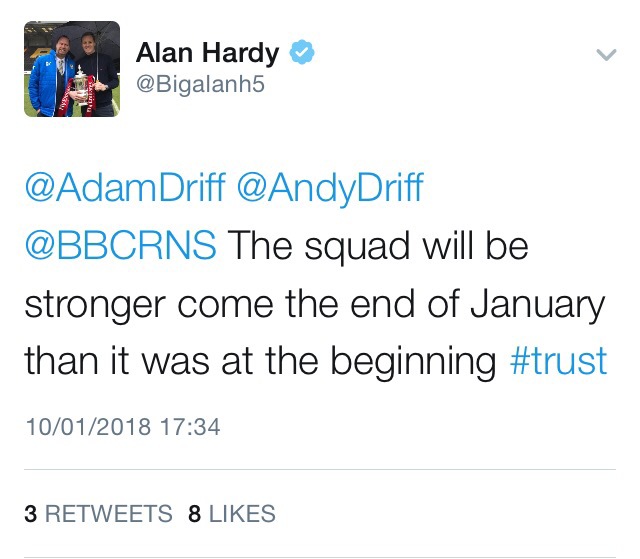 Big talk indeed. So, are we? Are we stronger now than at the beginning of January?

Like previously mentioned, centre half was seen as the key area to strengthen purely because of Nolan’s reluctance to even have Hollis on the bench, let alone deputising for Duffy or Brisley in the case of absence. It felt odd at the time to allow Hollis to leave when he did when no one came the other way. Add to this Pierce Bird heading on loan to Alfreton Town and for a few weeks you’ve got horrifically thin defensive options, especially centrally.

This came to a head at home to Exeter when Hewitt went to centre half and we lost continuity and quality both at centre half and centre midfield. With Yates gone and numerous new personell in that position, Hewitt has to be the fixture in central midfield from now on.

Ben Hall arrives from Brightion and Hove Albion with a good reputation and some first team experience in Scotland with Motherwell. For the last 18 months or so he’s played under-23 football at Brighton and with that comes positives and negatives. Clearly he’s played and at a decent standard but as we’ve seen with Matty Virtue, the transition from under-23’s to first team football is a challenging one. Will the fitness be there? Will the ability to manage a game, the pressure and the expectation be there? Only time will tell.

On the balance of things I think I’d be happier to have Hollis deputise for the odd game when needed; someone who’s been there and done it and could slot in with ease Saturday if the situation necessitated it. Let’s hope Hall has more of the impact that Marc Bola did last season rather than Josh Clackstone.

Most would argue that in the first half of the season, the midfield was the key component of the side. It looked well balanced whether it was Rob Milsom or Hewitt alongside Ryan Yates whilst Terry Hawkridge proved realiable going both ways down the right. Obviously the headline maker was Jorge Grant. The man who’s scored all the goals and created a fair few others.

But the real headline maker was Yates. For such a young man to have such an impact on a side is quite remarkable. The way he knitted the team together was superb. Strong in the tackle, positionally brilliant and calm and controlled in possession. I’ve described him as the heartbeat of the side and as soon as he was taken out we noticed. We noticed big time.

As Yates left, his midfield berth became another area of the team that needed a body or two. In fact, we had three; Noble, Husin and Virtue and all were given their chance to shine against Exeter. There wasn’t much shining. Whilst you’ve got three nice footballers there’s very little bite and defensive capability. Husin, deployed in the CDM role can clearly pick a pass, as was supremely evident against Swansea (in a 4-4-2 mind…), but was at fault for the first Exeter goal by not tracking his runner. Hopefully, if he is deployed with Hewitt he can complement his work rate and energy and provide that quality on the ball that he’s shown real glimpses of so far.

Virtue got around well but looked knackered after an hour, both against Exeter and Crawley. Against Crawley he actually grew into the game, but only when we went to 4-4-2 and Hewitt was played alongside him centrally. He played on the floor, looked forward and hit feet, very encouraging. His evening was soured with the red card and many seem to have written him off; I wouldn’t be so quick too. He looks like a lad whose got the attributes to make it in the game. Similar to Husin, if he can be used centrally in a two then he should and looks to have enough about him to make a contribution.

The odd one for me is Noble. I never wanted him back in the first place. Tactically I never saw how he fitted into Nolan’s system and style. He cannot play in a central two because defensively and positionally he’s weak. There also seemed no way Nolan would change from the 4-4-2 that has served him so well. Against Exeter he had a fine second half, dictating play and picking passes from a deeper lying midfield role. Fast forward to Crawley, the 4-5-1 was persisted with and Noble played like an absolute drain. Hooked after 60 odd minutes.  The baffling thing is that he’s been here three months integrating. Surely they’ve worked on how he can fit in to the system? Maybe he was destined to slot in with Yates but with him gone, it feels like we’ve tried to accommodate him because he’s here. For someone who is so tactically inflexible he seems to be the biggest gamble of the three.

The other midfield departure of the window was the opinion splitting Curtis Thompson. I’ve championed Thompson’s cause on many an occasion and as soon as Yates left, it was clear Thompson should’ve been utilised. Especially when Hewitt had to be moved to centre half and Rob Milsom, the other engine room we possess was out injured. He’s more than good enough to play at this level and the next; his physical attributes suit the lower leagues. He’s tenacious, good in the tackle and strong as an Ox. He can play too; he give is simple and allows others to shine, but that’s not his limit. Many have maligned Thompson, but given a run he’d have delivered; exactly like he did every time he’s been given a chance in the team beforehand. Clearly, he wasn’t in Nolan’s plans and found himself at Wycombe Wanderers. A day or so later, he found himself on their bench against top of the league Luton. 80 odd minutes into that game, he found himself coming on, in central midfield with Wycombe 3-2 up. About 10 minutes later, Wycombe had seen the game out, taken three points and leapfrogged Notts into second spot. Wonderful. Loaning him to a direct rival is absolutely absurd. He’ll only strengthen Wycombe. I’d much rather have CT than Noble.

Overall, I think the jury is out on whether the midfield is stronger than it was at the start of January. Losing Yates is a nightmare. He’s been our player of the season so far, despite Grant’s goals. Husin and Virtue look to have great potential, but potential against tried and tested? Give me Yates and CT’s experience any day. As for Noble, I said I didn’t see how he fit in and both Husin and Virtue have started ahead of him when he’s been available to be picked and we’ve started 4-4-2. Telling.

Although it came awfully, awfully late in the day, it happened. We signed a striker; the position everyone wanted. Mason Bennett comes in from Derby County with a lot of backing, especially from his parent club. Many have been quick to Tweet his goals and appearances ratio from Wikipedia but that’s just lazy. When you break into a Championship side at 16 you’ve clearly got something. Even though he’s short in stature, Bennett is built like an absolute house; he looks ready for League Two football on Saturday against Crewe. He’s quick, works hard and will provide a real handful. His movement will cause an array of issues for defences in the next six months. I firmly believe that with a run in the side he will score goals and be a real asset. He’s different to what we’ve got and should compliment Stead and Ameobi well. He should also hit it off with Grant, two clever footballers with hopefully too much for some backlines. I’d have him in from the start on Saturday. Up alongside Stead. He’s been around the derby first team and made appearances recently, so he’s fit. Let’s not wait. Get him in and let him run. What makes his signing even better is that, at the time of writing, we still have Jon Forte too. Four frontline strikers; great scenes.

As was expected, Mr Hardy tweeted his satisfaction at the clubs dealings and confirmed that he had delivered on his promise to have a stronger squad post transfer window. Clearly yesterday was frenetic and behind the scenes we worked tirelessly to strengthen where necessary but I’d stop short of proclaiming we are stronger than we were a month ago. Up front we are certainly stronger, no doubts. But in defence in midfield, whilst in numbers we are stronger, we’ve swapped a lot of experience for a lot of potential. Last year we saw the huge impact Bola and Grant made and we really need Husin and Virtue in particular to step up. We do not need a repeat of Tavhon Campbell.